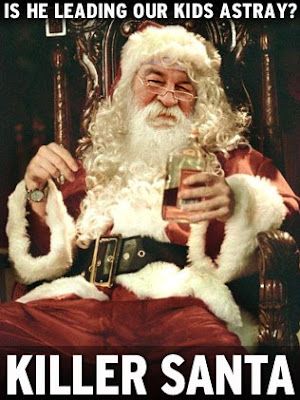 SANTA Claus has been accused of acting in ways that could "damage millions of lives".

As the mythical man in red zooms around the planet delivering gifts, he is an unwitting promoter of obesity, unhealthy products, disease and even drink driving, according to an Australian academic.

"Other dangerous activities that Santa could be accused of promoting include speeding, disregard for road rules and extreme sports such as roof surfing and chimney jumping," said Dr Nathan Grills, public health fellow at Monash University's Department of Epidemiology and Preventative Medicine.

"Despite the risks of high speed air travel, Santa is never depicted wearing a seatbelt or helmet."

Santa's "rotund sedentary image" also had the effect of making "obesity synonymous with cheerfulness and joviality" around the world, he said.

Children were also encouraged to leave out brandy, or other hard liquor, for a man who had to do a lot of travel and visit a lot of houses all in one night.

Amid a global swine flu pandemic, Dr Grills said most people who stood in as Santa impersonators were not required to undergo a health check - and they get "kissed and hugged" by a succession of "snotty-nosed kids".

Instead using a sleigh, Santa should be "encouraged to adopt a more active method to deliver toys - swapping his reindeer for a bike or simply walking or jogging", Dr Grills said.

Posted by Mikael at 10:51 Ingen kommentarer:

On a normal day, Majken Friss Jorgensen, managing director of Copenhagen's biggest limousine company, says her firm has twelve vehicles on the road. During the "summit to save the world", which opens here tomorrow, she will have 200.

"We thought they were not going to have many cars, due to it being a climate convention," she says.

Ms Jorgensen reckons that between her and her rivals the total number of limos in Copenhagen next week has already broken the 1,200 barrier. The French alone rang up on Thursday and ordered another 42. "We haven't got enough limos in the country to fulfil the demand," she says. "We're having to drive them in hundreds of miles from Germany and Sweden."

The airport says it is expecting up to 140 extra private jets during the peak period alone, so far over its capacity that the planes will have to fly off to regional airports – or to Sweden – to park, returning to Copenhagen to pick up their VIP passengers.

As well 15,000 delegates and officials, 5,000 journalists and 98 world leaders, the Danish capital will be blessed by the presence of Leonardo DiCaprio, Daryl Hannah, Helena Christensen, Archbishop Desmond Tutu and Prince Charles.

The top hotels – all fully booked at £650 a night – are readying their Climate Convention menus of (no doubt sustainable) scallops, foie gras and sculpted caviar wedges.

Posted by Mikael at 14:59 Ingen kommentarer: